Rockfall fence is a general term used for a group of mitigation measures designed to stop or control rockfall as they occurs. They are typically built using steel posts and a flexible-net supported by wire rope. The systems are anchored to the ground using rock or soil anchors. Their evolution over the past 50 years has seen them transform from rudimentary systems fabricated on-site and with minimal engineering basis to commercial products that are highly engineered and subject to strict testing guidelines and certification.

Where fence capacities were once considered large at only 100 or 500 kJ, systems are now commonly installed up to 5000 kJ, some even higher. The benefits of low material cost, ease of installation and high adaptability to difficult topography have made them a valuable tool for engineers to help mitigate rockfall hazard and protect life and property. Thousands of kilometers of roads throughout the world are now protected by such structures as are other vital infrastructure such as hydro electric and mine sites, pipelines, public facilities and private residences.

The traditional form for a rockfall fence is a true "catchment" fence. The system is designed to stop debris from passing through the plane of the fence, though a certain elongation of the system is required. Ultimately the material is brought to rest within the confines of the system and is bounded by the upper and lower bearing ropes supporting the nets.

Rockfall attenuators as the primary function of the system is to reduce the energy of falling debris and control the bounce heights. The systems normally have no lower bearing ropes and so the material is free to exit the system, though normally with reduced velocity and an altered trajectory.

In the case of a hybrid system, the function lies somewhere between the two preceding cases. The debris may still be contained between the upper and lower bearing ropes but differs since the lower bearing rope has been removed from the base of the post to a strategic position further down slope where the accumulation of debris is more easily removed.

There are two primary styles of rockfall catchment fence systems: those with a fixed connection between the post and base plate and those with a hinged connection. In general terms, fixed post systems are much heavier than hinged systems with the same energy capacity. This is because the hinged system distributes forces from the post head directly to ground anchors via upslope retaining ropes. In contrast, the fixed post systems require a larger post cross section to resist the forces as well as more involved anchoring of the post base to resist overturning.

Trumer offers two lines of products based on the guidelines each system has been tested to. Prior to 2008, all systems were tested according to guidelines from the Austrian Department of Torrent and Avalanche Control (WLV). Subsequently, the new ETAG 27 guideline of the European Organization for Technical Approvals (EOTA) was introduced in Europe, according to which all rockfall protection fences had to be tested. Since 2019 the ETAG 27 guideline has been replaced by the European assessment document EAD 340059-00-0106 of the European Organization for Technical Assessments (EOTA).

More information on the differences between these guidelines can be found on the Rockfall Standards page. 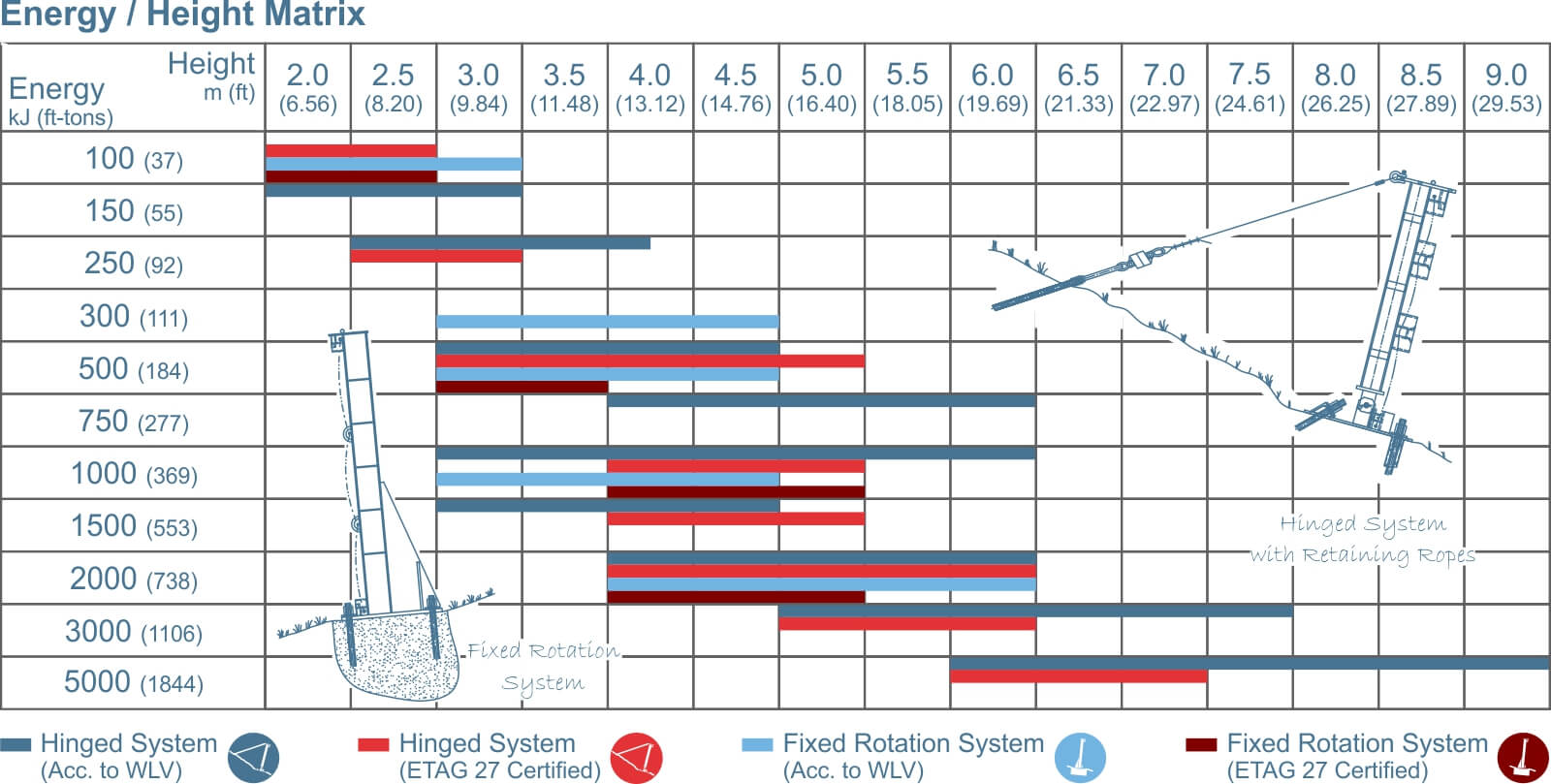