The A8 is an important motorway running between Kanfanar and Matulji, in western Croatia. The first construction began in the mid-1970s, with significant upgrading and extensions over the past four decades. A build-operate-transfer concession agreement has been in place since 1995. In recent years, several minor rockfall events have occurred and have resulted in the need for rockfall mitigation and slope stabilization. In 2015 and 2016, a design-build tender was carried-out with construction started in October 2017.
The section of motorway of concern is approximately 225 m long. Of this, 105 m is constructed on backfill material with a 8-15 m high retaining wall supporting the outer shoulder. The remaining 120 m of road is a viaduct constructed within a few meters of the slope. The road corridor is a maximum of 10 m wide. At either end of the road segment, there is a U-shaped portal. A near vertical rock face up to 60 m high is found adjacent to the road and forms the face of the portals.
During the course of the hazard analysis, a total 58 unstable blocks were identified, ranging from 0.5 to 75 metric tonnes. A total of 11 characteristic block sizes were used as input for the rockfall modeling with a range between 5.4 – 13.6 tonnes at positions varying from 35 – 60 m above the road. The resulting energies were between 900 – 6500 kJ. This resulted in the further identification of blocks that were required to be stabilized in situ due to the high energy or extreme bounce heights and those that could be mitigated with a structure.
As part of the overall mitigation, 285 lineal meters of TRUMER TSC-2000-ZD and TSC-3000-ZD rockfall catchment fences (2000 and 3000 kJ capacities, 6 and 7 m high) were selected to provide protection for the the highway. You can find out more information about this project in a presented at the Geohzards 7 conference in Canmore, Canada. 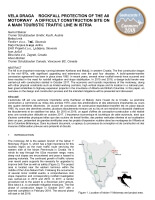